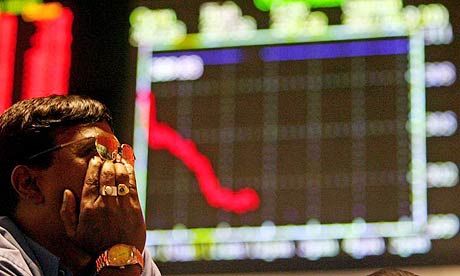 The UK is in serious danger of heading into recession as the credit crunch tightens its hold on the economy, according to a survey of businesses across the country published today. An increase in the number of firms reporting fewer orders, more job cuts and less investment is the latest indication that the British economy is suffering from the effects of the global credit crunch and the steep rise in the price of fuel, food and other raw materials.
Firms in the service sector have seen "alarming" declines in the past three months, with those reporting lower orders outnumbering those recording rises for the first time since 1990, the British Chambers of Commerce's latest quarterly economic survey of 5,000 companies says.
It adds that if these trends continue, the business sector is only three months away from technical recession.
Government figures yesterday showed that manufacturing production in May dropped unexpectedly by 0.5% from the previous month, and was down by 0.8% on this time last year. The wider measure of industrial production, which includes output from utilities and mining, also posted a decline of 0.8% in May.
David Frost, head of the British Chambers of Commerce, said: "These results show a real risk of recession in the coming months. This is deeply worrying, not just for business, but for the consumer too, with both manufacturing and services reporting negative results. The temptation for the government will be to raise business taxes in the next pre-budget report because the exchequer is running out of money. This would be a catastrophe."
Opposition parties used the survey to claim that the government had failed to deal with the impact of the credit crunch. The shadow chief secretary to the Treasury, Philip Hammond, said: "This survey will only add to British businesses' concerns about the economy. Instead of being supported in these difficult times, they are facing more tax hikes because Gordon Brown failed to fix the roof while the sun was shining."
The survey shows the bad news spread evenly across the country. Among service sector firms, only one region out of 12 - the West Midlands - saw more companies reporting higher orders rather than a decline. The worst-hit area was Scotland, with a balance of 18 percentage points showing falling orders.
Manufacturers fared little better, with firms in only four regions - Wales, Northern Ireland, the east and the north-east - recording higher orders on balance.
Manufacturers in London, the north-west, Yorkshire & Humber, East Midlands, Wales and Scotland also expect to shed jobs over the coming months.
The soaring cost of raw materials and fuel is causing companies to cut investment in plant and machinery. Manufacturers in five of the 12 regions are scaling back, with the sharpest declines in the south-east. The BCC said the balance of manufacturers intending to raise prices hit an all-time high - 45 percentage points - for the third quarter in a row, with raw material increases also affecting the service sector.
The BCC's economic adviser, David Kern, said the survey shows a "menacing deterioration" in UK prospects. "The outlook is grim, and we believe that the correction period is likely to be longer and nastier than anticipated."
The Bank of England's monetary policy committee faces difficult choices when it meets tomorrow to discuss interest rates. "A major recession can still be avoided, but forceful measures are needed to improve confidence," said Kern. "The MPC must resist misguided calls for higher interest rates."
A separate survey by REC/KPMG showed that the number of people placed in permanent jobs fell again in June, while vacancies for full-time staff dropped for the first time in five years.
Howard Archer at Global Insight said: "The bad news on the UK economy is coming thick and fast, and the downturn appears to be deepening appreciably."
Alan Nolan, a director at KPMG, said: "This really is a sobering set of figures proving the credit crunch has finally taken its toll and is now severely weakening the UK jobs market."
Germany also reported "alarming" figures yesterday. Industrial output fell 2.4% in May - worse than expected. The drop, the worst monthly fall for more than a decade, on top of a 0.2% fall in April, added to fears that Europe's biggest economy, which grew by 1.5% in the first quarter, may have contracted in the second.
France and Italy are expected to report similar falls in industrial production this week, while Denmark is technically in recession and Spain and Ireland are suffering steep rises in unemployment.
Publicada por Mário Pinto à(s) 4:26 da manhã